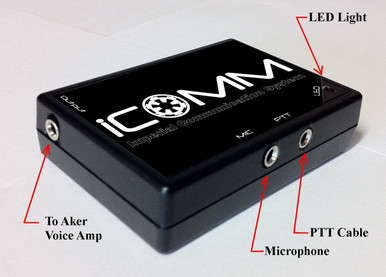 Give your voice an authentic Stormtrooper sound with this easy to use random static burst system. It is truly plug and play. Complete with Voice activation or push to talk.

NOTE! The iComm requires an VoiceBooster Voice Amplifier in order to work. Here is a link to the most commonly purchased amplifier for Stormtroopers.

Special Note Regarding the VoiceBooser MR1505 model (3/13/2016): The issues that were having bwtween the iComm and the MR1505 have been resolved with a hardware revison to the iComm.

We have the static burst sound that you have been looking for.

We know that you want something that just works and does not have a bunch of complicated settings. We tried all of the other static burst cards on the market. Most of them are not very good but a couple of them are good systems. While those systems offer great features, those systems may have drawbacks for some users, depending on their intended use. Some examples may be high price, availability, complicated settings, un-protected circuitry, and external battery packs.

The iComm was made to be a simple plug and play static burst box. It has 8 random static burst and adds a small about of background static and voice modulation to simulate a transmission. It is powered off of the VoiceBooster voice amplifier so there is no external battery pack. The iComm comes in a self contained protective box small enough to easily fit inside armor. It works in both voice activated mode (VOX) or in push to talk (PTT) mode. The iComm even allows you to select and play just one static burst sound.

Note: If you order an amplifier that is not the VoiceBooster brand there is a good chance the iComm will not work with it.

o Not included: VoiceBooster Voice amplifier, Microphone. These can be purchased separately on this website.

What is the difference between the Type 1 PTT and the Type 2 PTT cables?

To my business partners Jeaky and Dirk, Thank you! You made it happen!

To my Testing team, Daniel Carlton , Terry Chui, Noel Green, and James Atkinson, you guys are the best and you made the iComm what it is today. Thank you!